Step aside White Claw, Arizona is getting two new options for hard seltzer.

The first is called Becky and has been brought to life by friends and longtime bar industry professionals Sheldon Wiley and Eric Burdick. Four flavors of the hard seltzer are available now in restaurants and bottle shops around the state.

The second is a hard seltzer made with solar energy called Sun Day, which has joined Four Peaks Brewing Company’s lineup of offerings. As of the second week of March, six-packs of lime hard seltzer or mixed 12-packs of four flavors are now available in Arizona.

Since White Claw and Truly launched in 2016, hard seltzers have exploded in popularity and the market continues to skyrocket. That means the big national brands are starting to see smaller names break into the competition.

Becky has been in the works for two years, Burdick says. Inspiration for the concept came from working in Scottsdale nightlife, where he noticed a growing number of orders for vodka sodas.

“People were hopping on the health train and sugar was taking a back seat,” he says.

But he wanted to find a way to make the classic vodka soda more flavorful. Partnering with Wiley, an award-winning mixologist, the duo came up with the idea to make a flavored spiked seltzer. 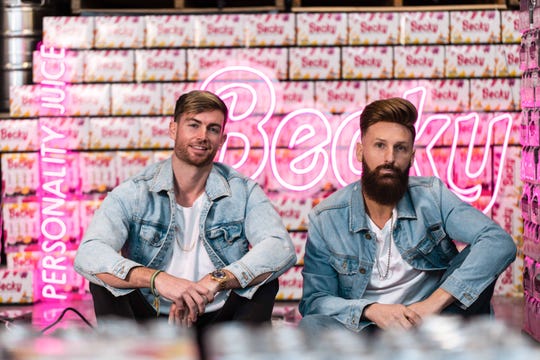 “White Claw and the internet really paved the way,” Wiley says. “But hard seltzer is not going anywhere. The category is on fire.”

So, the duo set out to create their own. They started by tasting hundreds of flavor samples. It was important to add “flavor and boldness” and to make sure Becky tasted fresh without any artificial flavors or aftertastes, Wiley says.

They eventually settled on pink lemonade, passion fruit, mango and tropical cherry flavors. Each variety starts with a pink lemonade base, to provide a tart, citrus flavor. Natural flavorings are then added to create a “balanced cocktail,” Burdick says.

“Becky is very versatile, she’s great out of the can or as a mixer in a cocktail,” Burdick says. 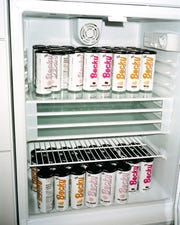 Although launching a new company in the middle of a pandemic was “insanity,” Wiley says, selling canned, ready-to-drink cocktails also made a lot of sense.

“Becky is convenient, you don’t have to go to a bar or rely on a bartender,” he says. “You can just refrigerate and enjoy.”

Each can of Becky comes in at 100 calories and 5% alcohol by volume, or ABV. The hard seltzer is currently available at Total Wine, BevMo and AJ’s Fine Foods locations in metro Phoenix.

Becky can also be found at…