The 10 Essential Aperitivo Bars to Visit in Italy

When one aspires to drink like an Italian and embrace all of the sprezzatura charm the idea evokes, aperitivo is the best bet. It’s a word that represents what you’re drinking—something light, dry, possibly bubbly and likely bittersweet—but also the occasion and ritual surrounding it. That golden hour gathering is when friends and colleagues meet up for drinks and light bites, where a spritz and olives signal a transition from the work day into the promise of the night ahead.

Aperitivo can range from a more elegant affair in a high-end hotel bar to a more casual offering at a neighborhood café. While the drinking ritual remains more prevalent in the north of Italy, the promotional powerhouses, brands like Campari and Aperol, have made it ubiquitous throughout the country—and beyond.

Caffè Mulassano
Located in Piazza Castello, in Turin—the northern Italian city where aperitivo culture as we know it began—Caffè Mulassano is one of the city’s oldest cafés. It holds a longtime relationship with the Cuneo-based distillery Bordiga, which has been making an exclusive red bitter called Liquore delle Alpi for Mulassano since 1879. Traditionally, the aperitivo is enjoyed on the rocks or in a Mulassano Spritz, served with complimentary canapés. Italy’s famous tramezzini, small triangular sandwiches made on soft white bread, were invented here in 1925; today, more than 30 styles are offered at the long marble bar inside.

Caffè Torino
An iconic neon sign with the logo for Turin producer Martini & Rossi hangs across the portico of Caffè Torino, which stands out among the arcades of Piazza San Carlo. On your way inside to order a Milano-Torino, be sure to admire the dancing brass toro embedded in the cobblestones among the outdoor tables. They say that giving a tap on the “lower part” of the bull with your foot brings good luck and a promise to return to the city. Inside, it’s all Art Nouveau grandeur: An ornamental staircase stretches to the second level, gilded mirrors adorn the walls, crystal chandeliers glitter and drinks are served from a marble bar.

Bar Basso
With its pink walls, marble floor, wood paneling and ornate chandeliers, Bar Basso, founded in 1947, remains a stylish gathering spot for students, artists, journalists and those in the fashion world. The late Mirko Stocchetto took over the bar in 1967, at a time when classic cocktails were mostly found only in high-end hotels. One night in 1972, the story goes, he accidentally reached for a bottle of spumante instead of gin when making a guest’s Negroni, and his most famous creation, the Negroni Sbagliato (“mistaken Negroni”), was born. His son, Maurizio, now runs the bar, and the Sbagliato is still served in a foot-tall, 1-liter, custom-made goblet over a large block of ice (though regulars traditionally take their drinks in a smaller stemmed goblet). It’s accompanied by chips, olives and little sandwiches.

Camparino in Galleria
Since 1915, Camparino in Galleria—located on a prime corner of the landmark Galleria Vittorio Emanuele II and across from the historic Duomo di Milano—has served as the bittersweet soul of Milanese aperitivo culture. The newly renovated two-story building was first opened by Davide Campari, the son of Campari creator Gaspare, and its rich history and iconic original drinks (Campari Seltz, Americano, Shakerato) have attracted a host of artists, intellectuals, opera singers and celebrities. A must-visit for any tourist, Camparino balances honoring the past while also staying current with modern cocktail techniques.

All’Arco
Don’t let the fact that All’Arco has only three tables deter you from stopping by. Instead, join the crowd of locals and budget-conscious travelers standing elbow to elbow outside this neighborhood bacaro, and drink an ombra of white wine or a Spritz Veneziano made with Select Aperitivo. The daily rush is overseen by a father-and-son team of Francesco and Matteo Pinto, who took over the 100-year-old bar in 1996 and introduced a vast selection of cecchetti, featuring the likes of porchetta sandwiches, crostini topped with whipped salt cod, and bites of fresh seafood from the nearby Rialto fish market.

Harry’s Bar
Founded in 1931 by Giuseppe Cipriani in San Marco on the banks of Venice’s Grand Canal, Harry’s Bar (named after benefactor Harry Pickering) has attracted a star-studded cast of devotees, including Orson Welles, Frank Lloyd Wright and Truman Capote. But the bar’s biggest claim to fame remains being the birthplace of the Bellini. Witness the white-jacketed bartender line up a row of juice glasses (rather than the brunch-favorite flute) filled with white peach purée to top off with prosecco, resulting in a vibrant pink drink with a layer of white froth. You’ll pay a steep price for the experience of drinking among the well-heeled clientele; the gratis aperitivo snack might be limited to a bowl of olives and how you’re dressed may determine where you’re seated (men in shorts are quickly escorted upstairs, out of view). But for history, ambiance and a perfect Bellini, Harry’s is your guy.

Caffè Lietta
You can’t visit Florence, the city where the Negroni was created in 1919, without ordering at least one of Italy’s most iconic cocktails. The now-shuttered Caffè Giacosa (previously known as Caffè Casoni) in Piazza della Libertà was the birthplace of the Negroni, where Count Camillo Negroni asked bartender Fosco Scarselli to fortify his Americano with gin. Giacosa was renovated and modernized in 2002 by designer Roberto Cavalli, who made it his atelier and boutique while keeping a café in the back of the building. Giacosa and the boutique closed in 2017, but the stylish legacy of the historic space lives on with Caffè Lietta. The redesigned café, named after Cavalli’s sister, artist Lietta Cavalli, is overseen by his nieces Francesca and Lucilla Tacconi.

Caffè Meletti
The three-story Art Nouveau building on the corner of the Piazza del Popolo, with its pink-and-green palette and huge letters—“ANISETTA MELETTI”—hung on its façade, would be at home in any Wes Anderson production. In 1907, local liqueur industrialist Silvio Meletti purchased the building, turning it into a production facility and café. The space became known as “the Senate” for its status as a social and cultural hub that attracted the likes of King Vittorio Emanuele, Ernest Hemingway and Jean-Paul Sartre. Meletti no longer owns the building, but the popular anisette can be ordered traditionally, con la mosca (decorated with three coffee beans representing health, wealth and happiness), or in a spritz. Whether you sit outside beneath the portico or in one of the green velvet banquettes, a Bitter Meletti Shakerato alongside the region’s famous olives all’ascolana (fried olives stuffed with meat and cheese) is the perfect start to an evening. 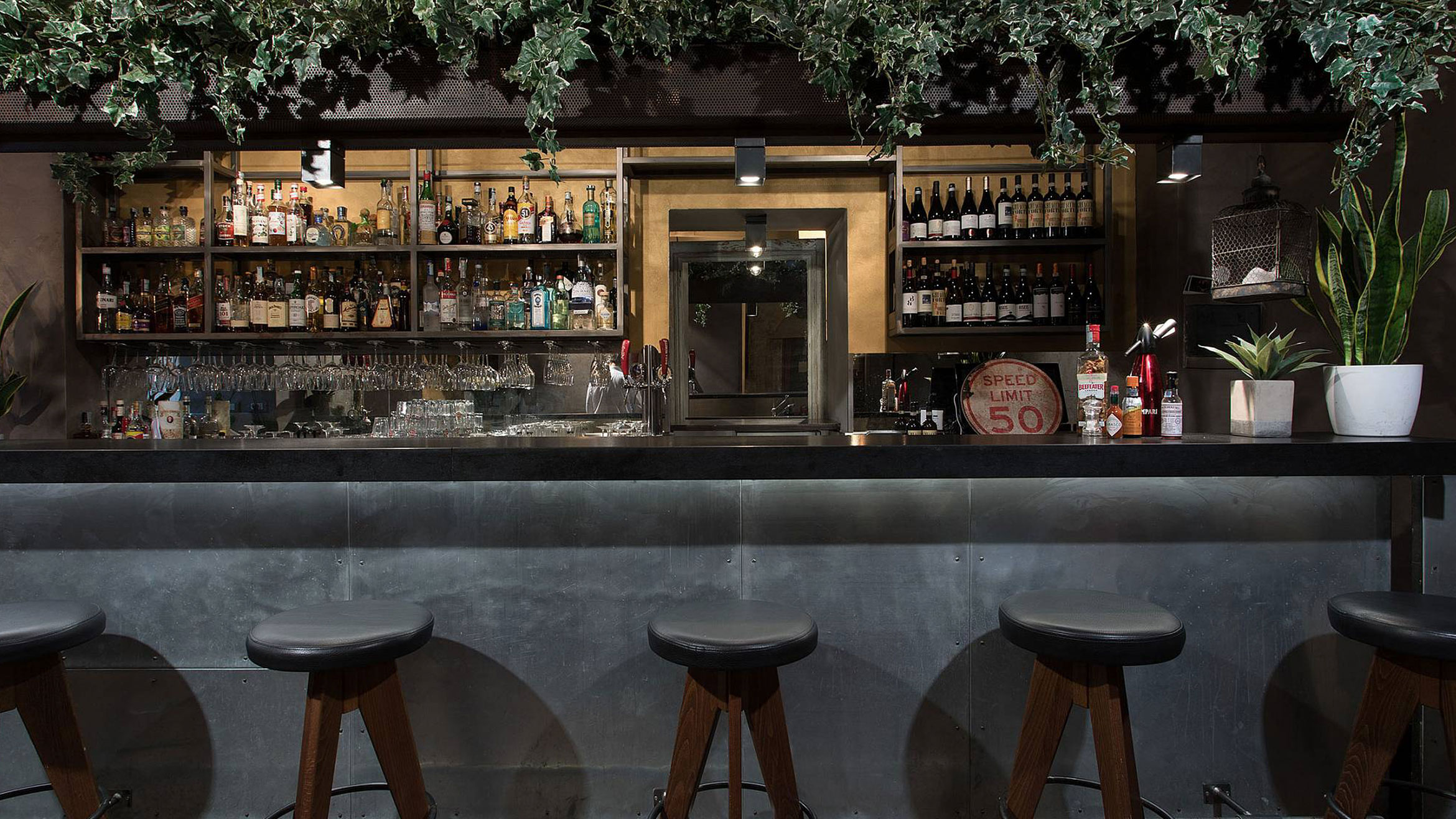 Bar del Fico
For a more modern interpretation of aperitivo in the Eternal City, visit Bar del Fico, named after the fig tree that stands just outside among the many alfresco tables. While the historic venue dates back to the 1940s, newer owners have calibrated the vibe into a lively, cosmopolitan atmosphere while updating the drinks list to include more classic and modern cocktails, such as a house Negroni made with fig-infused gin, in addition to aperitivo classics, including nearly a dozen spritzes (and a buffet of gratis snacks). Despite being tucked away in the touristy heart of Piazza Navona, Bar del Fico has established a devoted cast of neighborhood regulars, from the older daytime crowd playing cards and chess, to Rome’s younger set, who come for the aperitivo and return for the late-night DJ sets fueled by Negronis.

Il Goccetto
When it’s time to trade in the spritz for a glass of vino, the intimate yet incredibly popular enoteca Il Goccetto (“a little drop”) has you covered. First opened in 1983, the wine bar displays hundreds of bottles of Italian wine, filling every available shelf along the wood-paneled walls. A large chalkboard lists a rotating menu of by-the-glass wines from featured producers. In warm weather, the crowd of locals spills out onto the sidewalk to buzz about with glasses in hand, along with small bites like salumi, cheese, antipasti and pickled vegetables.

How to Add Coconut Cream, Water and Oil to Cocktail Recipes