It was a terrible, no-good two years for in-person spirits events (make that in-person events of any kind), but things are finally, thankfully starting to return to normal. Chris noted (with some surprise) that Whiskies of the World held its San Francisco event last fall but at a reduced scale. Washington, D.C.’s famous Jack Rose Dining Saloon was having none of that for their Premier Drams event held in June. If they were going to bring back their world-class whiskey festival, it was going to be just as big, if not bigger, than previous years.

The third running of the festival pulled no punches, expanding to a neighboring, two-story restaurant space and hosting even more brands than previous years, all offering an impressive selection of rare bottles from single casks to distillery exclusives to ultra-premium limited editions you’d be lucky to find on even the best liquor store shelf. Hell, Willett brought a 17-year-old single barrel bourbon. And they don’t even really do whiskey festivals. Maybe my tolerance waned during the pandemic (I doubt that), but I drank with purpose for the festival’s entire three hours and there were still a dozen or so bottles I regretted not getting to try. Ah well, there’s always next year (fingers crossed).

Brief tasting notes on everything I sampled, to the best of my recollection, are below.
Tasting Report: Jack Rose Premier Drams 2022 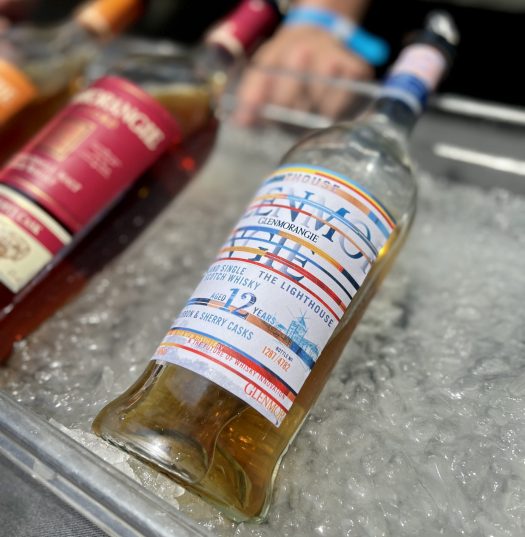 Glenmorangie The Lighthouse 12 Years Old – A mix of 80% bourbon- and 20% sherry-aged single malt bottled to commemorate the new Lighthouse distillery, available only in the gift shop in Scotland. Well-balanced and elegant with that classic honeyed, custardy character married to rich stone fruit, citrus, and dark baking spice. A

Scotch Malt Whisky Society Cask 9.215 – Produced by Glen Grant and aged in first-fill bourbon casks for 17 years. Bright and lemony on the nose with a palate that is initially light and grassy before building with intensely sweet notes of powdered sugar, vanilla cream icing, and toffee. B+

Scotch Malt Whisky Society Cask 83.78 – Another well-aged Speyside offering from (closed) Convalmore, aged 18 years in first-fill casks. Earthy on the nose with a bit of lemon biscuit. The palate sees more citrus along with buttery fruit pastry and some subtle tropical notes. B+

Benriach Cask Edition 1997 – Aged in ex-oloroso casks for 24 years and bottled at cask strength. Gorgeous exotic spices on the nose with a sultry palate of leather, sandalwood, and dark stewed fruit that concludes with a long finish of roasted nuts and dark berries. The standout scotch of the afternoon. A

GlenAllachie 12 Years Old PX Single Cask – Bottled exclusively for ImpEx, aged in a Pedro Ximenez puncheon, and bottled at cask strength. Intense dark fruits on the nose and a rush of alcohol. Big and bold on the palate with generous warmth and thick, sweet notes of dark raisins and black cherry. Long warming finish with more syrupy dark fruits. A-

GlenDronach Cask Bottling Batch 18 2005 Cask 1928 – Aged 14 years in a Pedro Ximenez puncheon and bottled at cask strength. I certainly agree with Chris’s review that this drinks much older with exotic sandalwood and incense notes and a healthy amount of dark, well-aged barrel character that offer a great contrast to the brighter, intense sherry components. Beautiful stuff. A 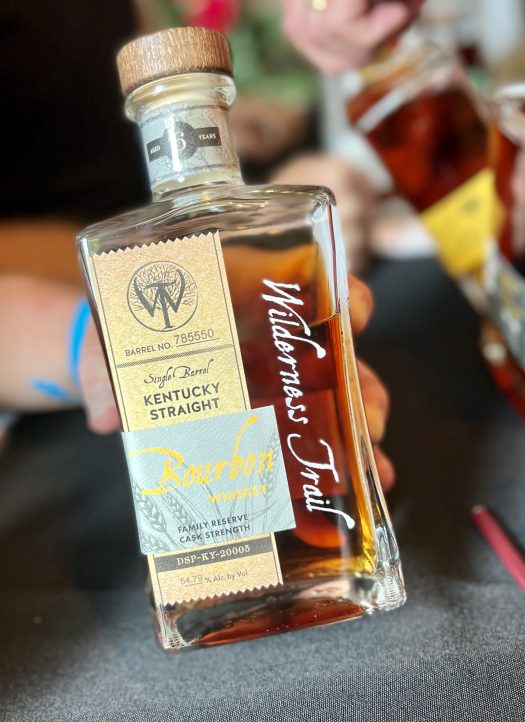 Wilderness Trail Family Reserve Single Barrel – A new cask strength version of Wilderness Trail’s 6-year-old single barrel bourbon. This takes the bonded offering I tasted in 2020 and kicks it up a level with bigger and bolder baking spice on the nose and a rich, sweet palate accented by notes of apple pie and dark caramel. A-

Bardstown Bourbon Co. Discovery Series #7 – Returning to this one after reviewing it earlier this summer, and I’m still struck by how unique the Canadian component has made it. Still has loads of fruit, barrel-driven sweetness, and a unique floral element. But on this sampling the finish shows a bit more spice. A-

Willett Family Estate Single Barrel Bourbon 17 Years Old – This was probably the biggest unicorn of the event, which explains why the line was ten times longer than any other booth. A 17-year-old single barrel bourbon from an unknown mashbill and producer bottled under Willett’s Family Estate label. A nose of old furniture and leather is sultry with balanced oak. The palate is similarly well-built with rich brown sugar sweetness and leathery notes of dried apricot and orange peel. The finish relents somewhat with an exuberance of spice cabinet and drying oak, but still a standout offering alone worth the price of admission. A 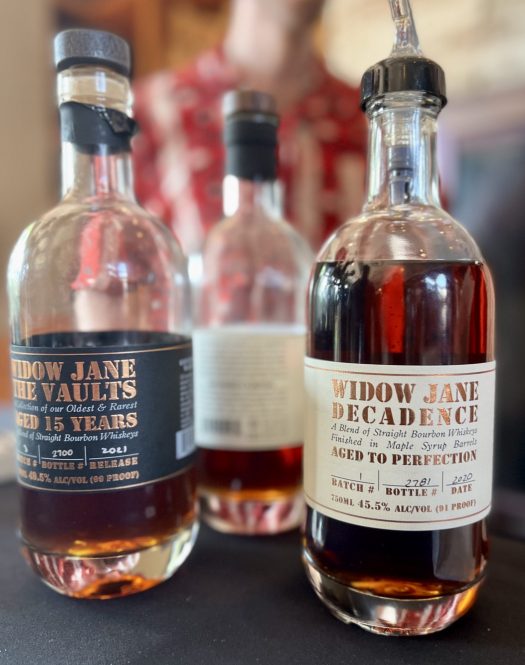 Willett Family Estate Single Barrel Bourbon 8 Years Old “Celebrate Willett” – A somewhat unusual example of Willett’s house-distilled bourbon and the oldest I’ve yet encountered. This one is intensely earthy on the nose with clay and muddled mint that eventually gives way to some peach pie. The palate is heavy with an almost tart, citrus-dominated sweetness and secondary notes of damp tobacco, clove, and seasoned oak. B+

Nelson’s Green Brier Belle Meade Black Belle – Part of the distillery’s Craftsmen Cask series (all of which were available for tasting). This is MGP-sourced bourbon finished in an imperial stout cask from BlackStone Brewery and bottled at cask strength. The nose showcases big baking spice and dark berry notes with a rich, malty palate that turns unusually tart on the finish. B

Widow Jane The Vaults Aged 15 Years – A blend of 15 to 17 year old sourced bourbons finished in Adirondack Oak casks (a new one for me) that have been air seasoned for a whopping 42 months. This is perfectly executed, older bourbon. Spicy and rich on the nose with dark red fruits, baking chocolate, and a creamy vanilla-filled palate. Cherry Garcia ice cream in a bottle, as I mentioned (I think) to blender Lisa Wicker. The standout bourbon of the afternoon. A+

Milam & Greene Castle Hill Batch 2 – Chris called this one “a beautiful whiskey from start to finish”, and I must agree. Exceedingly approachable at a generous proof, with a lush palate chocked full of well-aged bourbon notes: raisin, dark chocolate, soft baking spice, and old barn floors. A 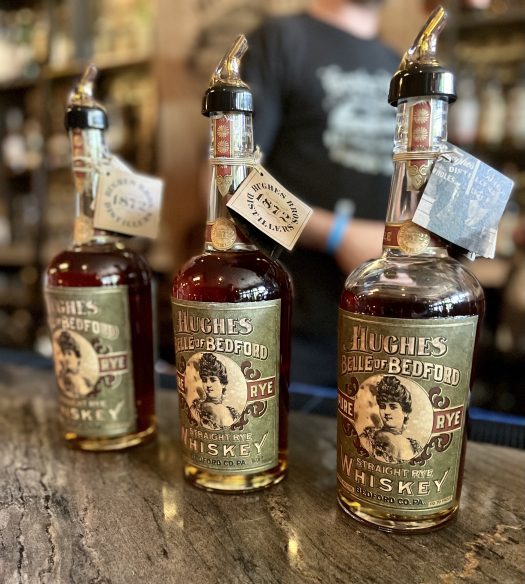 Hughes Belle of Bedford Rye Single Barrel – A 10-year-old, single barrel MGP-distilled rye selected by the brand owner for the event. Well-balanced with a big layer of fruit cake and lots of warm rye spice. A-

Bardstown Bourbon Co. Single Barrel Rye – One of the more unique offerings of the event was a single cask, cask strength 95/5 rye distilled at Bardstown Bourbon Co. and presented as an “unfinished sample” ahead of its eventual release under the Origin Series label. Impressively approachable at cask strength with a rich, syrupy palate and subtle earthy spice. Texture is spot on, but as it is now, the flavors are surprisingly subdued. B+ 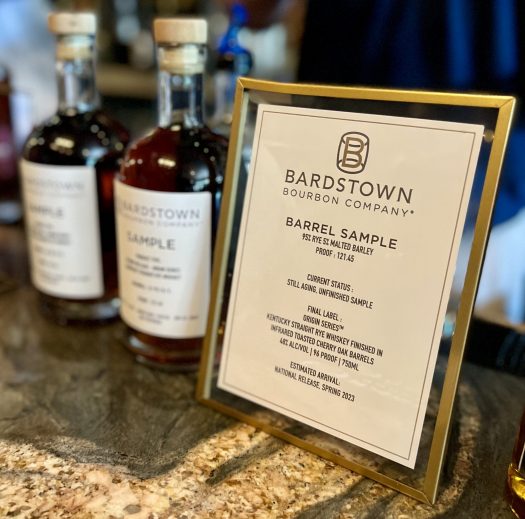 Sagamore Spirit Blended Rye Cognac Finish – Four-year-old rye finished for 8 months in a Cognac cask. The nose is rather subdued with a subtle mix of classic rye notes. The palate offers up a brighter, fruitier dimension from the finishing cask with some more wood-driven complexity. B+

Sagamore Spirit 5th Anniversary American Whiskey – This is Sagamore-distilled rye whiskey bottled at 83 proof. Balanced with a lush, sweet palate, it’s a bit underpowered, especially compared to the Bottled-in-Bond expression, but there’s still a decent amount of peppery rye and baking spice on offer. A bit sharp on the finish. B+

Willett Family Estate Single Barrel Rye 8 Years Old – Willett’s house-distilled rye whiskey and one of the oldest rye whiskeys from the distillery I’ve encountered. This one is a scorcher, full of classic Willett jackfruit notes on the nose. Some seasoned wood and fruitcake elements on the palate kept all that intense sweetness from going entirely off the rails. A-

New Riff Balboa Rye – One of New Riff’s earliest “riffs” on traditional American whiskey, made with a rare heirloom Balboa rye grain and bottled in bond. Big on the nose with wood spices, creamy caramel, dried fruits, and cocoa. The palate is well-balanced and honeyed with bright stone fruits, orange zest, rye spice, and soft oak notes. A- 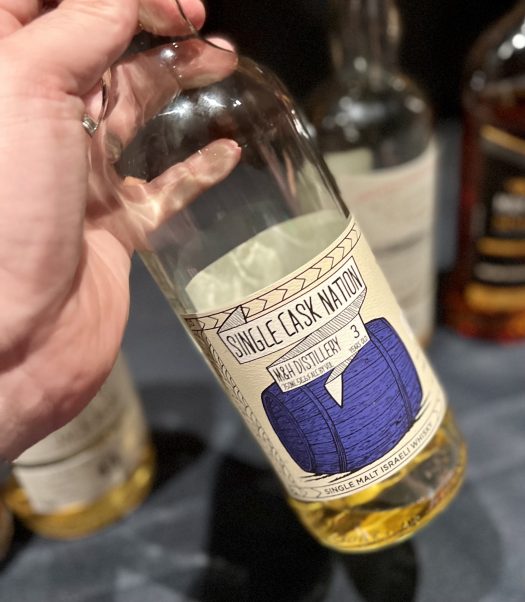 Takamine Koji Whiskey 8 Years Old – Made using koji mold during fermentation, this is a bright and lively whiskey with plenty of summery citrus character on the nose. The palate stands out for its gentle wood influence which seems to allow more of the gingery and fruity distillery character to shine through. B+

Ohishi Tokubetsu Reserve – An oddly old tasting and funky whisky, even for a rice-based offering. Lots of heavy sherry notes and an unusual bit of spice on the midpalate I couldn’t quite place. Earthy and tart on the finish. B

How the Pandemic has Affected Sommeliers