In the age of bourbon sourcing, blending, and cask finishes, Jefferson’s Bourbon certainly stands out as a pioneer. Launched in 1997, the brand predates the 2010s “Bourbon Boom” by more than a decade, and Jefferson’s founder Trey Zoeller has witnessed most of the industry’s current trends since their inception. Indeed, Zoeller and his team were early to embrace bourbon blending — which he initially called “marrying” to avoid associations with Scotch — as well as novel aging techniques, made famous by the Jefferson’s Ocean line of spirits aged at sea.

Today, Zoeller is open with stories about near misses and lucky triumphs from a different era in American whiskey. He purchased some of the last few hundred barrels from the old Stitzel-Weller distillery, liquid that’s now the stuff of legend among bourbon aficionados. While such bottles fetch upwards of four figures at auction today, they used to sit untouched by consumers hesitant to spring for “premium” bottles with $100 price tags.

More recently, Zoeller has redoubled efforts to help Jefferson’s stand out in an increasingly crowded bourbon market. That means navigating the inner workings of multinational drinks giant Pernod Ricard, which acquired the company as part of the Castle Brands acquisition in 2019.

Zoeller, now Chief Strategist for Jefferson’s, recently sat down with Drinkhacker for a wide-ranging interview on the state of bourbon, along with how Kentucky pride shaped the company’s trajectory from the start.

Note: This interview has been lightly edited for readability. 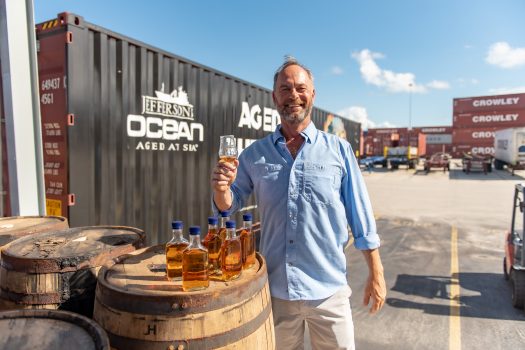 Drinkhacker: If you could go back to 1997 and give yourself one piece of advice, what might that be?

Trey Zoeller: Buy everything. I would say by the year 2000, maybe 2001 when United Distillers was divesting of Bernheim and Stitzel-Weller, I had one of those old red binders with the green bar paper. It had to be four inches thick, of all their inventory, everything. And I could have bought it all for a song. And it ended up that Heaven Hill and Sazerac ended up buying most of it, and I cherry picked a little here and there.

Drinkhacker: I’ve had some of what you cherry picked, and it turned out pretty good.

Trey Zoeller: I picked out some good stuff. Another thing, Brian Hue, who owned Cork ‘N Bottle, he owned Hirsch, the 16 and 20 year old, had it all in stainless steel. And he said, “Just buy my brand, buy this juice and go out and sell it for nothing.” And I couldn’t sell my own stuff at the time. So I passed on that, but I could have bought everything left of Hirsch 16 and Hirsch 20 at the time.

Hindsight is 20/20. So, you know, never look in the rear view mirror because it doesn’t do you any good except for learn from it. And go on instincts. I knew that Hirsch 16 was the best bourbon I’d ever had, and I knew it’d be worth something someday to somebody, and I should have trusted my instincts.

Drinkhacker: What are some decisions that felt risky maybe in the late ’90s, but ended up paying off in a big way?

Trey Zoeller: So I bought what would be the last 400 barrels of Stitzel-Weller juice out of there. And I had a hard time selling it for $100 a bottle, and Julian Van Winkle Julian wasn’t selling any of it at the time. Making purchases like that, there was no guarantee it would pay off. There were certainly no dreams that it’d be worth what it is today. Whenever you’ve got something like that, it can’t be replicated again, it’s going to be worth something down the line. You don’t know when. It’s kind of like buying beachfront property in 2008. You hold on long enough, it’s going to be worth something, because there’s no more of it. Same thing with some of that great old bourbon, but nobody really cared or wanted old bourbon at the time.

There wasn’t a market for it. That was risky. Putting barrels on a ship is an example. A lot of the experiments that we do, some of them pay off, some of them don’t. You win some of those, you lose some of them, but I think when you look at it and you’re putting out better bourbon or you’re investing in better bourbon for the time being, everything goes in circles.

One thing I wish I would’ve done sooner was investing in facilities, giving me the opportunity to control more of our destiny. 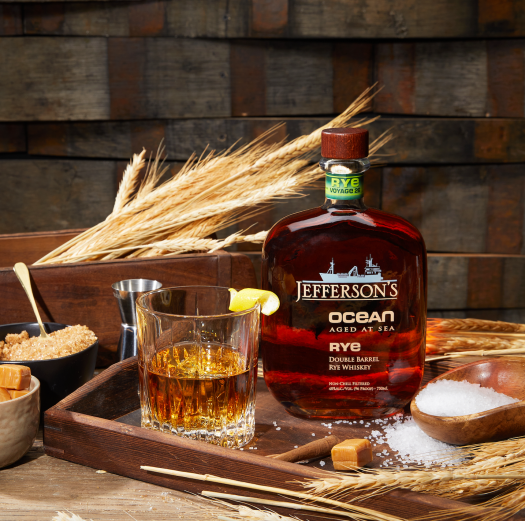 Drinkhacker: What are you focused on as far as helping Jefferson’s stand out as more brands, more blenders, and more sourced brands enter the market?

Trey Zoeller: It’s trying to push things forward to the next frontier. We were blending way before blending was cool. And as a matter of fact, it was the complete opposite of cool, blending was a total dirty word. When I started, we were blending Jefferson’s and Jefferson’s Very Small Batch and Jefferson’s Reserve. Everybody thought about blended Scotch whisky when you said “blend.” So I said “marrying” at the time. I think we were the first people talking about it. There were probably other people blending, but not to the extent that we were at the time. Of course we were just sourcing at the time, started contract distilling, and then distilling afterwards. But I knew that I had to do something different to separate ourselves from everyone else.

And about distilling: What am I gonna do? Out-distill Jimmy Russell or Parker Beam, or any of the greats back then? It’s not gonna happen. So I wanted to take what they’ve done and then add processes onto it to hopefully enhance it. So not trying to shortcut, but put more time, money, and effort into hopefully improving it, but certainly make it different. When we first came out with Ocean Bourbon, people said, “That’s not Kentucky bourbon, it wasn’t aged in Kentucky.” Well, people were originally aging whiskey on boats, which made it turn into bourbon for the first time. So everybody’s going to push back, including on finished bourbon.

And when something works, you just start peeling that side further and further and further and pushing it more and more and more. Just doing another finish right now, that’s not that exciting. When we were doing finishes 10 years ago, that was something new and different. Our wood experiments that we started doing in 2012, that was really novel at the time. Now, not so much. We’re working on some exciting new things to keep pushing things forward that I can’t quite go into right now, but it’s based on 25 years of experience, and we’re very excited about it.

Drinkhacker: How has entering the Pernod Ricard portfolio changed the trajectory of what you want to do and what you can do as a brand?

Trey Zoeller: It’s been a hindrance and a help to some degree. After two years, I’ve kind of figured out how to work within Pernod Ricard to get the machine working for me instead of against me. Specifically on the pace of innovation. Now I had innovations ready to go, but the company wasn’t necessarily ready for me, and we had to get a trust level where they were trusting what we were doing without having to go through the filters of a big company. But the resources that they provide — distribution, PR — once you get that barge moving in the right direction, it’s hard to stop it. From my point of view, it hasn’t always been easy, but again, it’s been a learning curve where I’ve had to learn how to work within that system to get things going at pace.

Drinkhacker: How did your upbringing in Kentucky impact your perception of the bourbon industry up until the founding of Jefferson’s?

Trey Zoeller: I’ll tell you, David: It wasn’t until just recently that I figured out really why I did it. And it was nothing more than Kentucky pride. When I was younger, I moved to half a dozen different places around the country that weren’t drinking bourbon. If you went to a cocktail party in Kentucky, all the guys were drinking bourbon and water.

Then I went to Tulane University. I met all these people that didn’t drink bourbon at all. And I wanted to introduce them to bourbon. I certainly wasn’t drinking any premium bourbons at the time, but I still thought what was available was much better than Scotch whisky. So it was really taking Kentucky pride and being obnoxious about it more than anything.

You go back and at my grandmother’s house, she didn’t ask you what you wanted to drink, but, “How do you take your bourbon?” Everything she cooked was smothered in bourbon, which I hated as a kid. I hated bourbon balls. But as you get older, you start to realize, “Hmmm, these are pretty good!”

I used to tell people I was from Kentucky. If they were from Brooklyn, they would go, “Oh,” and turn and walk away. Now they’re like “Kentucky? I want to go on the Bourbon Trail.” And Kentucky’s cool all of a sudden. It wasn’t cool 20 years ago.

Trey Zoeller: I just got goosebumps. That is so my experience. It’s unbelievable! And bourbon heritage 1000% is responsible for that.

Drinkhacker: Speaking of bourbon heritage, are there any groups you think are under-appreciated in the industry?

Trey Zoeller: I always say the coopers are bourbon. Brad Boswell from Independent Stave, I think he probably knows more about bourbon than anyone because he’s got the inside scoop on almost all distillers. Cooperage is the life blood, that’s the difference between bourbon and everything else. So they don’t nearly get the recognition that they deserve.

Drinkhacker: Is there anything else you’d like to say about what bourbon heritage means to you or how it’s reflected in Jefferson’s today?

Trey Zoeller: I think about the cyclical nature of spirits. Once you build up a taste for what you like and you become educated about bourbon, I think it’s kind of like the Renaissance. And how do you go back to the Dark Ages? You’re going to go back to drinking vodka after building up this knowledge? Bourbon has built a community for me. It’s allowed me to travel the world and meet the most unbelievable people. And it’s kind of a ticket into a lot of things that I would never get to do otherwise, and people I wouldn’t otherwise meet.

With a bottle of bourbon, there’s a story that you’re giving to somebody and you’re sharing it with them. And that’s making a friend.

David Tao is a writer for Drinkhacker.