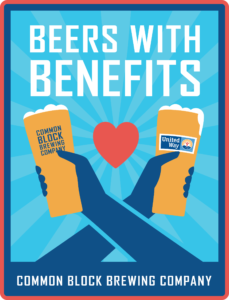 MEDFORD, Ore. —Common Block Brewery in Medford is bringing back its Beers with Benefits Fundraiser to support the United Way of Jackson County’s Fire Fund.

Beginning this week, Common Block will be giving $1 from every pint of its Rally Up Red Ale sold at the restaurant to the non-profit’s fund.

The United Way Fire Relief Fund goes toward people and organizations who were impacted by last September’s fires.

“This is just a really fun and easy way for people to help us give back to others, the fires affected all of us and so this is just a great natural fit,” says Common Block Owner, Danielle Amarotico.

Common Block will be tracking its beer sales all spring, those interested can toast to a good cause.

Anyone interested in donating to the United Way Fire Fund directly can do so at unitedwayofjacksoncounty.org/give.

NBC5 News Reporter Jenna King is a Burbank native. She graduated from the University of Oregon with a degree in Broadcast Journalism and a minor in Sports Business. During her time at the U of O, she was part of the student-run television station, Duck TV. She also grew her passion for sports through interning with the PAC 12 Network.

When Jenna is not in the newsroom you can find her rooting for her hometown Dodgers, exploring the outdoors, or binging on the latest Netflix release.

HAWLEY, Pa. — The search is on for two men who allegedly stole pallets of beer from a store...

TOPEKA, Kan. (WIBW) - Blind Tiger is offering up a taste of Kansas with its new brew. The restaurant...

Five Types of Drinks Made with Amla that will Strengthen Immunity