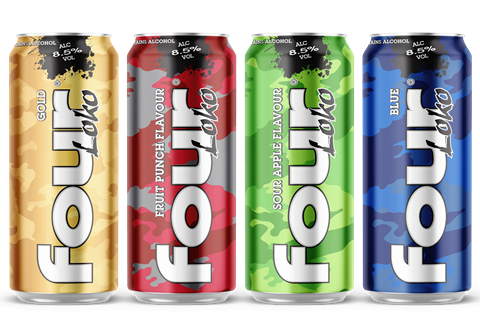 Controversial US RTD brand Four Loko has hit the UK.

The brand – which sells a range of high-strength RTDs stateside – quietly rolled out this month with a quartet of 8.5% abv drinks in 440ml cans.

The range comprises Blue, Fruit Punch, Gold and Sour Apple flavours. They will be distributed in the UK by Red Star Brands (rsp: £3.49/440ml).

The drinks themselves are vodka-based, using both natural and artificial flavours and beet sugar as key ingredients.

The brand has had a chequered history in the US. Originally marketed as an alcoholic energy drink, it came in at 12% and was made with taurine and caffeine up until 2010, when it switched up its recipe amid criticism of its alcoholic potency.

Red Star said Four Loko would recreate its US success “by building the brand through targeted social media activation, influencer-led events, and consumer experiences, later in the year. The brand will also launch its own e-commerce website for its fully engaged fanbase, offering merchandise and product for sale.”

BLAZY SUSAN | A conversation with the founder Will Breakell — Flaunt Magazine –

COLUMBUS, Ohio—Legislation to ban sales of over-the-counter cough medicine to children in Ohio is on its way to Gov....

How To Run Faster Than Before? | Most Searched Products

Professional athletes make sprinting look so easy, it is as if they were born to run. However, the truth...

I had a heart attack after drinking too many energy drinks

A DAD, 53, had a heart attack after drinking too many cans of energy drinks a day. Lee Kamen...

What do the new laws mean for you?

Free beer for a year from Gage for one lucky drinker